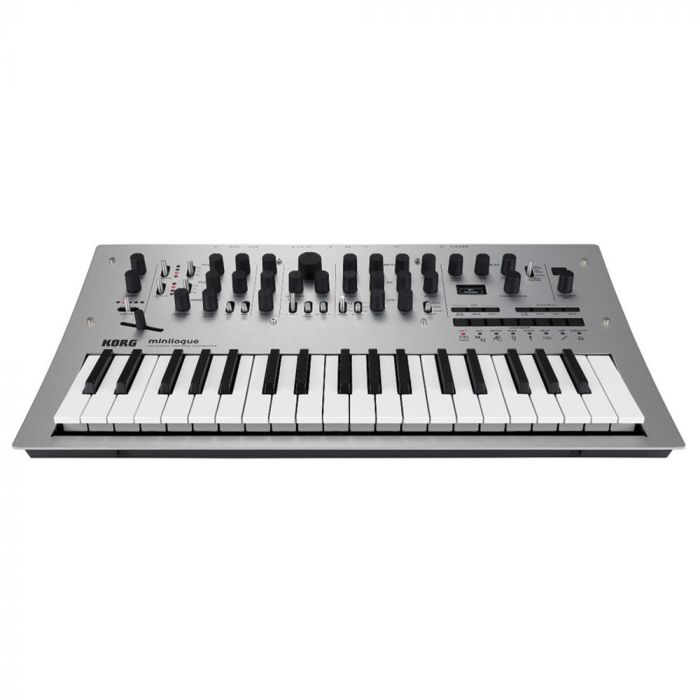 The Korg Minilogue Polyphonic Analogue Synthesizer is a versatile four-voice analogue synthesizer housed in a stylish aluminium top panel. This 37-key fully programmable analogue polyphonic synthesizer boasts 200 program memories, an Oscilloscope function that show the waveform visually, plus compatibility with a range of connections such as MIDI, USB MIDI and Audio Sync. Additionally, the synthesizer features an automatable 16-step polyphonic note and motion sequencer giving you a multitude of options when it comes to creating and moulding your sound. With its exceptional functionality and sleek design, the Minilogue Synthesizer is the ideal synth for anyone looking to expand on their sound.

The Minilogue has been designed to offer a multitude of powerful functions and controls that let you create and manipulate sound. The synthesizer itself features four voices and is programmable with up to 200 program memories with 100 preset sounds included. The selectable voice modes let you configure the four voices for added versatility. The voices can be set to four note polyphony for use when playing chords or they can be layered for more complex sounds. Other modes feature a range of sounds from bass explosions to layered triggering.

The built-in 16-step sequencer features motion sequence recording capabilities, which give you a wide spectrum of possibilities when it comes to recording and arranging sounds. Providing real-time recording with overdubbing, the Minilogue lets you record and arrange with each, with step-recording letting you record by consecutively entering notes, allowing you to create performance on the fly.

As well as creating your own sounds, Korg has included 200 presets ranging from thick, punchy basses to deep, atmospheric pads. You can also tweak these presets to articulate the sound you are trying to achieve. Additionally, there are 100 blank locations for saving presets of your own. This is a great tool as it lets you recall sounds and phases you've created, which can be used in live environments and music production.

One of the most unique features of this powerful synthesizer is the Oscilloscope. The OLED display with show you the waveform as you craft your sound. As well as being an entertaining add-on, this also helps when creating sounds as you see how the sound changed as you tweak each control.