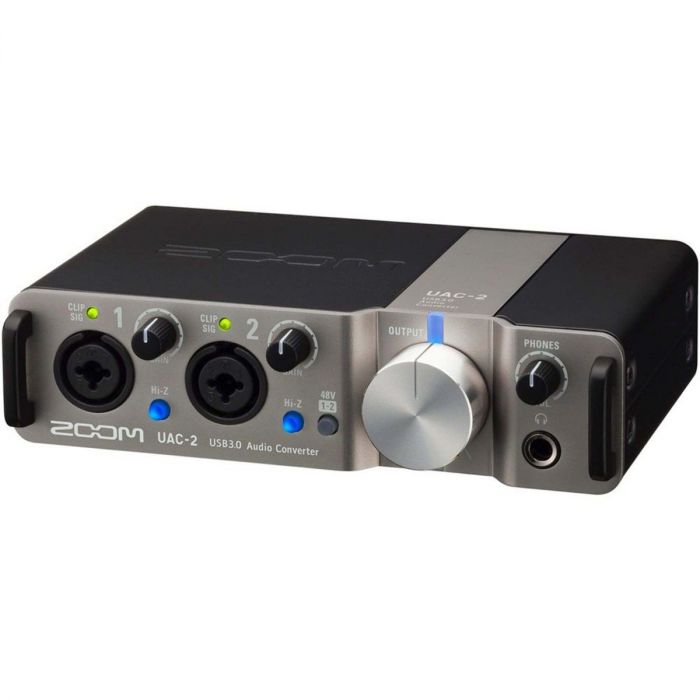 Step up to USB 3.0 SuperSpeed

The USB 3.0 SuperSpeed transfer protocol supported by the UAC-2 is ten times faster than USB 2.0 and six times faster than FireWire 800. The result is low latency (2.2ms roundtrip @ 96kHz / 32 samples) for improved performance from your DAW software and a stable data stream that is unaffected by computer jitter (slight variations in timing), so there's no need to connect an external master clock source. What's more, the extra bus voltage carried by USB 3.0 (900 mA, as opposed to the 500 mA carried by USB 2.0) allows for the use of higher-end electronic components such as the advanced preamps and converters in the UAC-2.

The UAC-2 is one of the most versatile interfaces ever. It works with everything from legacy USB 2.0 laptops and desktops all the way up to the latest-generation Mac or Windows USB 3.0-equipped computers. Or plug in an AC adapter and Apple Camera Connection kit or Lightning to USB Camera Adapter (sold separately) and use it with your iPad.

The UAC-2 uses high-end components such as the Burr-Brown PCM4202 analogue-to-digital converter and AKM AK4396 digital-to-analog converter. In addition, the UAC-2 performs 4-times upsampling during both analogue-to-digital and digital-to-analogue conversion. In other words, when the sampling frequency is set to 44.1kHz or 48kHz, the UAC-2 processes the signal at high resolution 176.4kHz or 192kHz. For A/D conversion, this means less aliasing noise; for D/A conversion, this means increased clarity and fidelity.

The USB 3.0 connector on the rear panel carries a digital signal to and from your computer in addition to providing power to the UAC-2 - no batteries or external power required. Dual front-panel combo XLR/TRS inputs allow you to connect a wide variety of microphones as well as line-level signals from electronic keyboards and music players - even passive instruments such as electric guitars and basses.

Dual balanced TRS output jacks enable you to connect the UAC-2 to amplifiers or self-powered speakers, and there's an independent 1/4" stereo headphone jack with dedicated volume control for private monitoring of the input or output signal. The UAC-2 is the first-in-class USB interface that performs 4-times upsampling during both analogue-to-digital and digital-to-analogue conversion (so that, for example, when the sampling frequency is set to 44.1kHz or 48kHz, the signal is processed at high resolution 176.4kHz or 192kHz, respectively). For A/D conversion, this means less aliasing noise; for D/A conversion, this means increased clarity and fidelity.