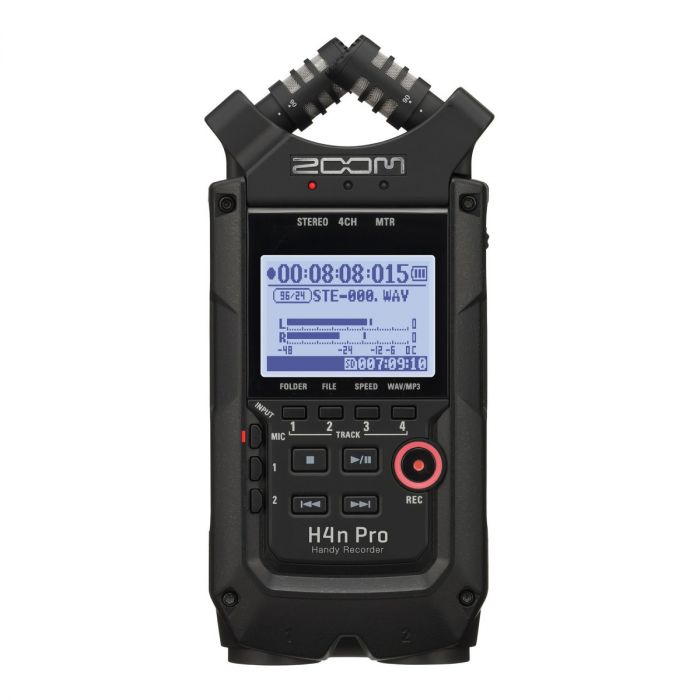 Musicians and content creators require a tool that allows them to capture the height of their creativity the moment that inspiration strikes. No matter whether it's a demo, your band rehearsal, a live show or recording foley for your next film or video, the Zoom H4n Pro Black Portable Recorder won't let you down; providing as much or as little of a recording studio that you require.

With onboard X/Y microphones, two combo input jacks, overdubbing, effects, and more, the H4n Pro is packed with features that allow musicians and creatives all the tools they need to produce a recording from start to finish.

Choose from a variety of effects, including EQ, compression, reverb, delay, amp and cab emulators and more. Practice with an onboard metronome, tuner and looper.

Can function as a 2-input/2-output USB audio interface for PC or Mac, the H4n Pro enables you to record directly to your computer.

The H4n Pro can capture audio in both MP3 and WAV file formats. WAV files recorded with the H4n Pro comply with BWF (Broadcast Wave Format) and include marks and creation dates. It allows for easy syncing and file organization for both musicians and filmmakers.

The H4n Pro is capable of recording the loudest and heaviest performances, up to 140 dB SPL without distortion. Take a line-level* stereo feed from the mixing console and capture room ambience with the X/Y microphones.

* +4dBu line-level is not supported.

A new look for a classic design

Design to travel with you and record anywhere, the H4n Pro’s design is the gold standard in portable recording.  Now available in a sleek and timeless, new all-black finish.

The H4n Pro offers two locking XLR/TRS combo jacks, each with switchable phantom power. Additionally, there is a mic/line input via the stereo 1/8” input jack.

Monitor your performance with headphones or connect to external devices using the stereo 1/8” line output with dedicated volume control.

Included with the H4n Pro