Order now, and this can be delivered by: Wednesday, October 05 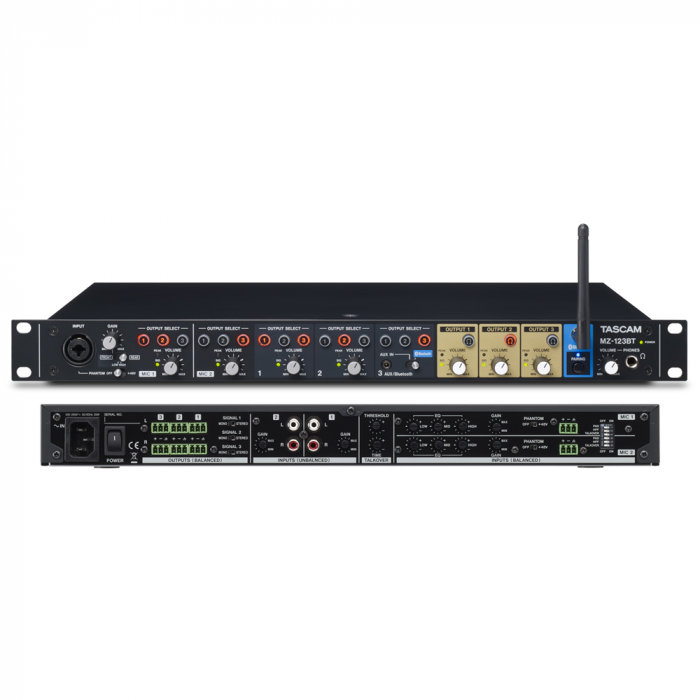 The Tascam MZ-123BT is a compact 1U multi-channel, multi-zone audio mixer for professional installation. It provides versatile routing, mixing and distribution of up to three channels of music and announcements for a wide range of commercial applications, including retail, restaurants, bars, cafes, hotels, or any environment that requires independent audio routing and announcement capabilities.

Featuring a simple, intuitive layout for ease of operation, the Bluetooth-enabled MZ-123BT comes equipped with two versatile mic inputs and automatic attenuation of background music for superior intelligibility during announcements or paging.

Three pairs of balanced stereo outputs featuring Euroblock connectors for fixed installations are accessible from the back panel. Each output can be set to output audio in mono or stereo.

The MZ-123BT has a dedicated Bluetooth antenna on its front-panel which helps ensure consistent stability of the wireless signal and reliability when streaming source material from a Bluetooth enabled device – even in the most signal-challenged environments.

Two mics can be connected via rear-panel Euroblock connectors while an additional XLR/TRS combo connector on the front panel allows an alternative microphone to be hooked up quickly and selected via a front-panel switch.

The back panel provides gain control knobs and three-band EQ (Low, Mid, High) along with a high-pass filter switch for each input for setting optimal input level, tonal quality and voicing character for each microphone.

Simple Layout for Ease of Operation

With a 1U rackmount size, the MZ-123BT is designed to fit seamlessly in an installed AV rack, with an optimised depth that allows greater connection space for other AV equipment such as Tascam CD / Solid State players.