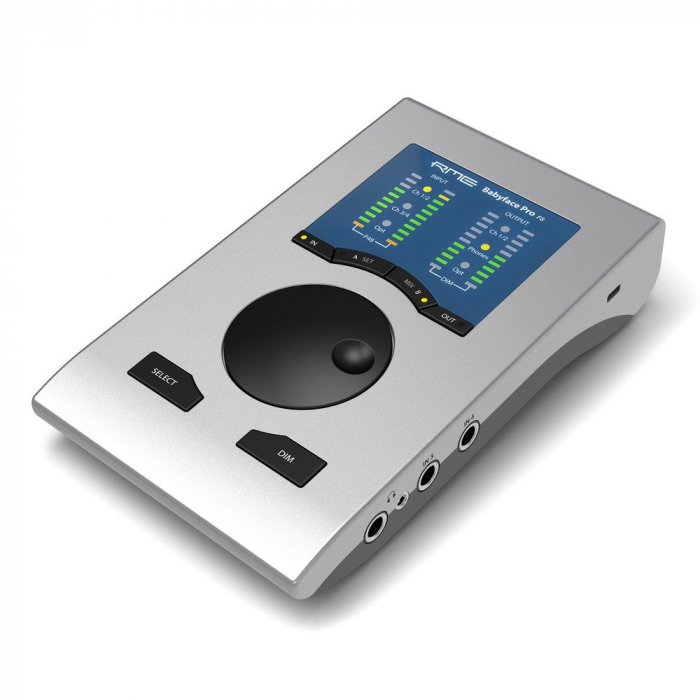 The clock frequency is an essential factor in digital audio, creating the correlation between the audio bits and time reference. Unfortunately for many devices, the clock frequency is not always as stable as desired. The Babyface Pro FS offers the full SteadyClock FS circuit, as found on RME's award-winning ADI-2 Pro FS AD/DA converter, and resulting in incredibly low jitter values and highest jitter immunity.

All clock modes provide excellent performance and astonishingly high-quality analogue conversion, allowing you to hear your mix exactly as it is. What's more, RME's digital format conversion occurs without any loss to the signal, and SteadyClock FS ensures your sonic image will never experience any kind of degradation. This helps to optimize recordings and mixes, ensuring the soundstage is replicated to the fullest depth and clarity.

The THD (total harmonic distortion) of both phones outputs has also improved by up to 10 dB, with the 3.5 mm connection's output impedance lowered from 2 Ohms to 0.1 Ohms.

For the main I/O RME have designed an XLR socket which integrates seamlessly into the housing. The comprehensive feature set continues with an optical TOSLINK I/O; use as either an ADAT port with SMUX support or SPDIF for sessions up to 192 kHz.

In combination with an external ADAT converter, the Babyface Pro FS fully supports 12 analogue inputs as well as 12 outputs, making it ideal for both live and studio multi-track applications.

Two balanced line inputs allow you to plug in any instrument, either line-level or high impedance, for recording with the Babyface Pro FS. Record your guitar on the go, with no additional hardware required.

The package is completed with MIDI I/O, accessible via the included breakout cable.

The Babyface Pro FS's user interface is both informative and clearly laid out, providing simple and intuitive access to every feature and configuration mode. Even in standalone mode, routing and mixing of inputs to outputs is possible directly from the front-panel controls, opening up a whole world of possible application