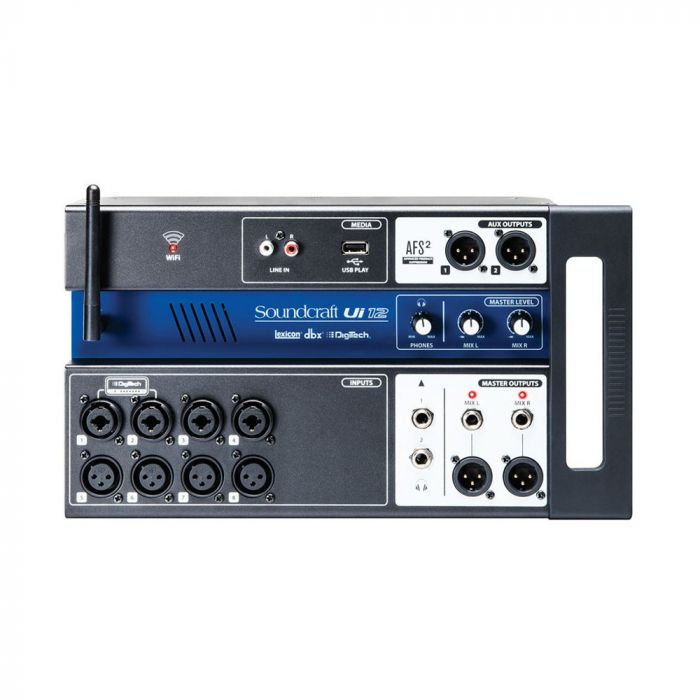 The UI 12 is a 12-input complete digital mixing system that's condensed into a compact, rugged and portable format. It's got no faders, limited buttons and knobs, cutting down the weight and the amount of things that could break after consistant touring. Instead, the UI series uses built-in Wi-fi so that anyone can control it anywhere from any device that uses a web browser. Yes that's right, there's no apps and no limitations to certain devices or operating systems. Just load up the address on your web browser and all the controls are at your fingertips thanks to a nicely designed interface

You also get a 2-channel USB media player is included so that you can just put all your backing tracks and background music on a USB. Two-channel USB audio playback is compatible with MP3, WAV and AIFF formats, so that you can choose between quantity on a small thumb drive, or quality.

Device Control at Your Fingertips

With no controls on the front panel of the UI Mixer, you make all your changes on your internet browser of choice. You can use your tablet, PC or Smartphone to connect, and unlike certain technology enthusiasts, it's not even fussy whether you prefer iOS or Android, Apple or Microsoft. Whatever you're comfortable using, just load up the address in your web browser and you're ready to go.

You can use up to 10 control devices simultaneously, but obviously you wouldn't want 10 engineers mixing at one time. Instead, you could have different members of the band controlling their own monitor mixes, whilst you control the main mix and effects.

The UI has a number of fantastic mix controls to help you get your mixes sounding the best. there's 4-band Parametric EQ, High-Pass Filter, Compressor, De-esser and Noise Gate on input channels, ensuring you get the best individual sounds coming in. then on the way out, you have control of a 31-band Graphic EQ, Noise Gate and Compressor on all outputs, so that the band can sound properly tight and together as a homogenous sound. (Unfortunately, professional musicians not included!)

There's also a Frequency analyser(RTA) on inputs and outputs so you can see what's happening in the mix and to help you make great sonic choices. Then, to give your mixes more punch and atmosphere, there's 3 dedicated Lexicon FX effects processors: reverb, delay and chorus.