SKU
338080
The Studio 192 from PreSonus is a USB audio interface with flexible connectivity in addition to professional monitoring and mixing controls in a single rack-space unit.
Our price £546.00
Notify me when this product is in stock 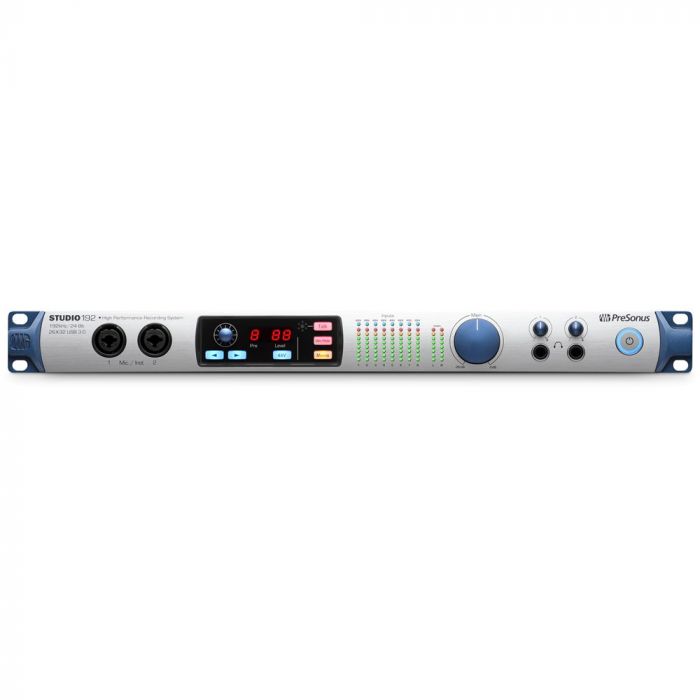 The Studio 192 from PreSonus is a USB audio interface with flexible connectivity in addition to professional monitoring and mixing controls in a single rack-space unit. It can be used as a central hub in project or professional studios when paired with a Mac or Windows computer for applications such as recording, editing, mixing, signal processing, and more.

Some of the features of the Studio 192 include an on-board talkback mic that can be routed to any mix, two headphone amps, and ten balanced outputs for monitor mixing or speaker switching, or both. In addition, the eight XMAX preamps now have remote control and you can control them right from within the Studio One mixer. Control preamp settings via MIDI in ProTools, Logic, or Live (sold separately), and save the settings with your recordings.

Your Studio 192 audio interface can also be an integrated extension of your recording environment. Launch Studio One and you'll find the preamp controls, speaker switching, mono, dim, and talkback functions needed to control your Studio 192. Create zero-latency mixes with Fat Channel processing. The plug-ins run on both your computer's processor and on your Studio 192 and switches with a seamless transition. This allows you to punch in while monitoring the same audio between playback and recording.

Finally, adding the right amount of effect and processing to a monitor mix can make a huge difference in your ability to experience a good performance naturally. The Studio 192 includes Fat Channel processing on every analog input plus a stereo reverb and delay. The Fat Channel includes a high pass filter, noise gate with key listen, compressor, 4-band fully parametric equalizer, and limiter. 50 factory presets created by professional PreSonus customers are included to help you quickly create the sound you want. The result is a better performance and a better recording.