Order now, and this can be delivered by: Tuesday, November 30 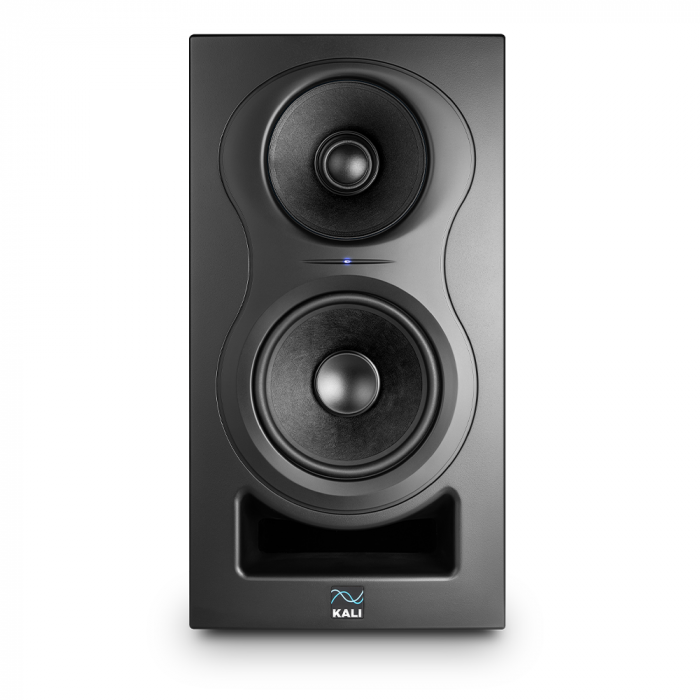 Kali Audio has announced the IN-5, a new 3-way studio monitor with a 5-inch woofer, and concentric 4-Inch midrange and 1-inch tweeter. The IN-5 fills out Kali’s “Independence” line of 3-way studio monitors, which also includes the larger IN-8. In both systems, the crossover point between the woofer and the concentric midrange/tweeter drivers makes the monitors acoustic point sources. This configuration eliminates spatial separation of the high frequency and low frequency elements, giving the monitors a highly detailed soundstage. The midrange driver also unburdens the woofer and tweeter, allowing for substantial system-wide improvements in total harmonic distortion.

The midrange is profile-optimized for its role as the tweeter’s waveguide, and peak-to-peak excursion is limited to one millimetre, thereby avoiding intermodulation distortion which can be problematic on coaxial designs. More than just a “little brother” to the IN-8, the IN-5 realizes a year’s worth of research and development as Kali strives to bring more value to their customers. The IN-5 introduces a new amplifier platform that reduces self-noise by 12 dB, and implements a more powerful DSP section, allowing for smoother high frequency response. The cones on the woofer and midrange driver have been updated, with new materials being used for greater reliability.

The IN-5 is powered by a 160W Class D amp with 80W going to the woofer, and 40W each going to the midrange and tweeter. Boundary EQ settings, like those found on Kali’s Lone Pine monitors, are accessible on the back of the speaker, along with a quick reference guide printed directly onto the speaker itself.

The IN-Series features a 5-inch woofer in the IN-5, and an 8-inch woofer in the IN-8. Both have a 4-inch mid-range driver, and a 1-inch soft dome tweeter. The mid-range driver and the tweeter are coincident, meaning that they share the same acoustic centre. You might have heard the terms “coaxial” or “concentric” to describe this arrangement. Those terms are technically correct as well.

Because of the coincident placement of the mid-range and tweeter, and the crossover of the woofer to the mid-range IN-Series monitors act as an acoustic point source. This gives them an ideal directivity characteristic for a studio monitor. You will be able to hear a very lifelike stereo image, with details placed clearly and consistently. Off-axis lobing that is unavoidable in a 2-way system is virtually eliminated with the IN-Series monitors

Substantial work was done to optimize the mid-range driver not only for its own acoustic performance, but also for its role as the waveguide for the tweeter. The shape is very precise to allow for controlled directivity at mid-range to tweeter crossover, ensuring accurate summing both on- and off-axis. Excursion on the midrange is limited to less than 1mm peak to peak, so that the oscillation of the mid-range does not have a negative effect on the tweeter.

The IN-5 and IN-8 are designed to have a continuous output of 85 dB at 2.2 and 2.8 meters, respectively, with 20 dB of dynamic headroom. This makes the IN-5 ideal for most near-field monitoring applications, and the IN-8 ideal for near-to-mid-field applications. 20 dB of headroom ensures that momentary peaks in sound pressure level, including instruments like kick drum and effects like gunshots or explosions, can be reproduced accurately and with minimal distortion.

The IN-Series monitors are equipped with a limiter circuit that will protect the speakers from un-safe voltage levels. This will be plainly audible as distortion, indicating that the speaker is receiving too much input signal. If this is the case, it is recommended to reduce the volume of the playback material.

The IN-Series monitors share port tube technology with Kali’s LP-Series, which was designed to deliver all the benefits of a front-firing port tube, without any drawbacks associated with noise. On most port tubes, air leaves at different speeds from different points of the opening, creating noisy turbulence. This turbulence can be heard as “chuffing,” or an audible air sound coming from the monitor. This sound will add to the noise floor and obscure the details of the low end. The port tube on Kali’s speakers was designed to ensure that all of the air leaves the port tube at the same velocity. This helps add to the low-end response of the speaker, while keeping the bass clean, tight, and devoid of extra noise.

Kali’s team came up with boundary compensation EQ settings at The Village Studios in Los Angeles to help you get the optimum sound for where you need to put your speakers. Combined with the LF and HF trims, this will ensure that the speakers sound their best no matter what room you’re mixing in. A full listing of the different boundary EQ settings and how to use them can be found on page 11 of this manual.