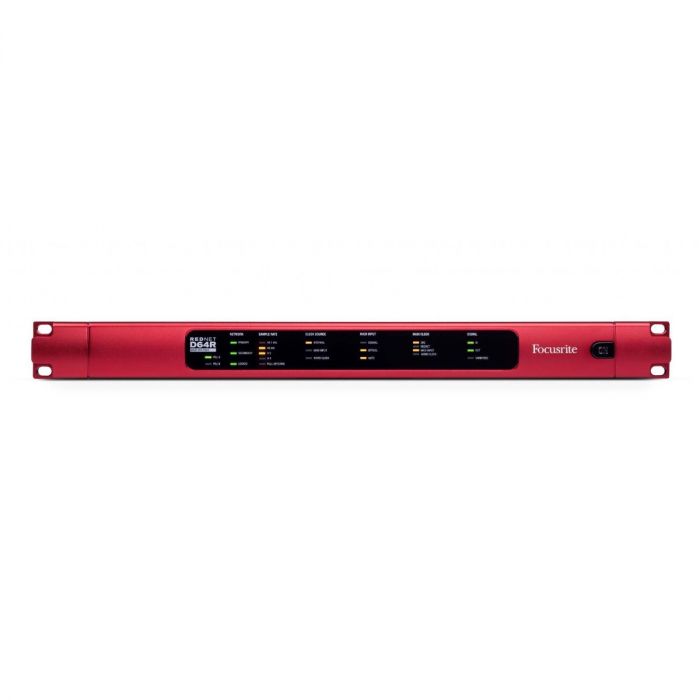 MADI is widely used for large-scale digital audio systems such as audio consoles and conversion systems, allowing multiple channels to be carried along with a single interface. The Focusrite RedNet D64R provides the link between a Dante Ethernet-based audio system and any MADI / AES10 setup. The RedNet D64R supports up to 64 channels of both coaxial and optical MADI interfaces, plus it is completely bi-directional, allowing the use of any Dante components including RedNet’s high-quality interface products with a MADI system or Madi components with a Dante system.

The RedNet D64R features a sample rate converter (SRC) on each input and output allowing interfacing between MADI and Dante irrespective of the sample rate at which either system is operating at. You can connect a Dante network to MADI-based digital consoles, computer cards, converters and much more. Additionally, to both coax and optical MADI interfaces, RedNet D64R provides Word Clock in and out.

Dual Ethernet ports are provided to you on the RedNet D64R, with locking etherCON connectors and several operating modes including daisy-chaining and redundancy confirmed by front-panel indicators. Additionally, on the D64R there are two separate power supplies with fault detection capability with separate power input sockets (including retaining clips) on the rear of the unit. The power status of the D64R is indicated both remotely and on the front panel.

The D64R features a rugged, road-worthy exterior with a high internal build quality that will stand the test of time, whether you’re based in a studio or out on the road. Additionally, the D64R is all wrapped up in a compact and convenient 1U rack-mount form factor for a full 64 channels of I/O.

Add MADI to Dante - or Dante to MADI

The D64R bridges a MADI system and a Dante network, and much like the rest of the Focusrite RedNet range it is fully interoperable with all other Dante network components. This bridging facility means you’ll be able to use RedNet’s expanding range of high-quality audio interfaces to put analogue or digital I/O where you need it, along with third-party Dante-compatible products. Also, you’ll be able to connect Dante components to digital mixing consoles, interfaces and cards that use MADI.

Overall, the Focusrite D64R is a second-generation bridging module that has been developed from the RedNet 6, and can significantly expand the options and possibilities of both MADI and Dante networks.