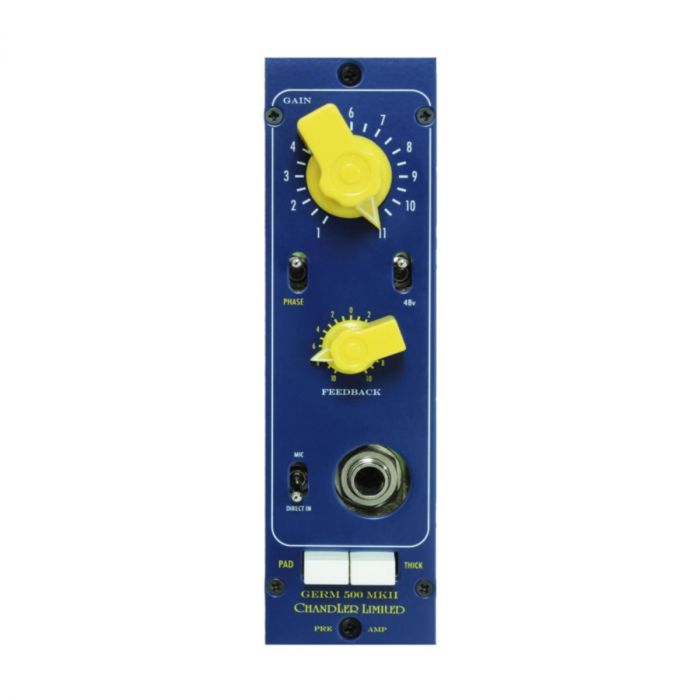 The Chandler Germanium 500 MKII is an updated version of Chandler’s original Germ 500.

An ideal preamp for producers, engineers and musicians of all kinds looking for a new addition to their studios. Users of the original Germ 500 will notice an improved faceplate layout and nicer feel and look. It uses classic germanium transistors in all Class A, transformer balanced circuits.

The Germ 500 MKII is the well-known Germanium Preamp adapted for 500 series racks, using the same transformers and amp blocks to assure the sound is consistent with the rack version.

The Germ 500 MKII's Feedback control is the key to its incredible tone-shaping ability. It uses feedback, the process of feeding the output signal back into the input of the amplifier, to boost gain. But unlike typical preamplifiers, the Germ 500 MKII lets you control the amount of signal that's fed back. The Feedback control affects more than just gain however, it alters the overall character of the unit, including its total harmonic distortion and frequency response, allowing you to perfectly sculpt the contour of your tone.

One of the features that make Chandler Limited's full-sized Germanium Pre-Amp stand out is its Thick function. This subtle tone-shaping control makes the Germ 500 MKII perfect for adding a gentle low-end swell to sources that sound weak or thin. You will love the way the Germ 500 MKII's Thick function adds weight to the sound of your guitar.

Equipped with genuine germanium-transistor-based Drive and Feedback circuits, the Germ 500 MKII lets you dial in luscious lows and creamy highs. Germanium transistors have been instrumental in the most revered preamplifiers and signal processors for decades. That's why Chandler Limited uses germanium transistors in many of their most popular models. With a Germ 500 MKII, that same signature sound is more accessible than ever before.

Chandler has updated the power on the MKII so there are no known power-up issues with current lunchboxes and rack systems.