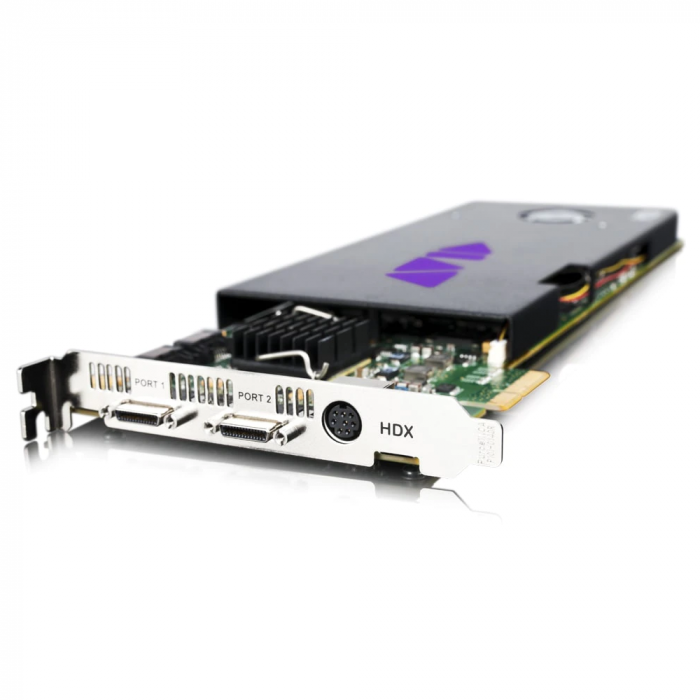 Power to the limits.

In recording studios and on soundstages, Pro Tools HDX Systems make some of the world’s biggest productions possible. Engineered for the highest performance, customisation and expansion they enable music and audio professionals to deliver their most demanding work, without constraint or compromise.

Pro Tools Ultimate is the platform while the HDX hardware accelerator is the engine and is all built to perform. Featuring 187 DSP processing cores, up to 768 voices and up to 192 I/O channels with 0.7ms latency. From recording the biggest bands to missing Dolby Atmos within the tightest timelines, this is the power to remove barriers so you can create your greatest work with nothing but ease and without constraint.

With 18 DSP cores and 2 high-performance FPGA chips, the Pro Tools HDX PCle card is a powerhouse that is finely tuned to process thousands of audio streams at staggering speeds. The central FPGA rapidly routes signals around the card one sample at a time, all with no latency! While the DSPs handle mixer and real-time plugin processing at an astonishing 6.3GHz aggregate clip, the result is a dedicated horsepower to mix even the biggest sessions and immense performance to record directly into them with real-time effects.

Capability you can count on.

The HDX Engine matches its phenomenal performance with rock-solid reliability. A second FPGA guarantees 256 voices per PCle card. It streams audio to and from your host CPU at uniform 32-bit float precision, preserving the highest possible audio quality throughout the system’s gain structure. So, when the work is mission-critical and you go to press the record button, you can count on the fact you are safely backed by an exceptional, unwavering capability that you can depend on during those situations where the stakes are so high.

HDX Systems support up to 3 PCle cards, so you can meet the scope of any project. Record orchestras, mix immersive audio and expand to the extremes with up to 768 voices and 192 channels. It’s extraordinary, scalable capability to make the most demanding music and audio post productions possible.

The HDX PCle card connects to Pro Tools hardware over uniquely designed connectivity formats. 2 DigiLink ports provide you 64 channels of I/O and ensure the highest fidelity audio in and out of the HDX Engine. DigiLink also allows Pro Tools to automatically compensate for hardware insert delays, while the DigiSerial Port is part of patented technology, providing unmatched sample-accurate synchronisation of video frame edges with audio.